NSC: Undercounted is Underinvested: How Incomplete Crash Reports Impact Efforts to Save Lives 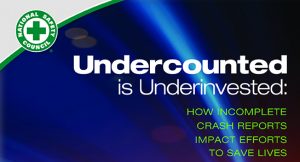 Preliminary National Safety Council (NSC) estimates show that 2016 may have been the deadliest year on the nation’s roads since 2007. As many as 40,000 people may have died as a result of motor vehicle crashes, while an estimated 4.6 million additional roadway users were seriously injured. This marks a 6% increase over 2015 and a 14% increase over 2014. There is so much loss, but little is known about key driver behavior factors in these crashes, because critical data is under-reported.

Collecting data from a crash scene may be seen as merely “filling out accident reports” for violation and insurance purposes. Data collection efforts immediately following a crash provide a unique opportunity to help guide prevention strategies. Currently, some states are recording this type data and others are not. When data of this kind is requested to be reported on a crash report
and is entered, prevention professionals will have the data to better understand driver and non-motorist behaviors. When this data is not recorded, prevention professionals are left guessing.

There are two areas of crash factor data in which under-counting can be a detriment to prevention efforts on a national level:

Components of an Investigation Report
August 20, 2021